Human kindness is the real — and only — currency. 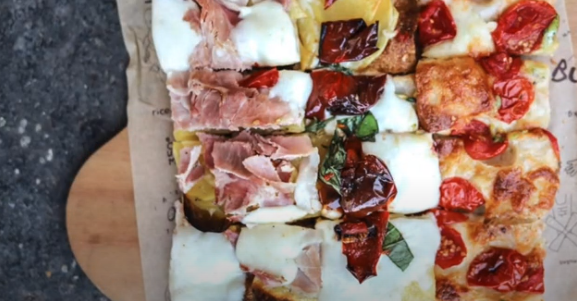 Stopped by a pizza place in northern Montreal today.
Had to go to the city, for an errand.
We remembered each other, me and the pizza guy.
Even though it would be easy to forget.
We recall the particular exchanged smiles from last time.
Or maybe some previous time.
The effort spent on a kind word.
On real eye contact.
Sensing that to exchange money and labor is a poignant thing.
Not humdrum.
A moment to sanctify the humanity.
To define the interaction beyond the frozen mineral realm.
Of monetary exchange.

Lucky if I go there once or twice a year.
At most.
One of the few places that sell slices.
For some reason, the pizza culture around here is full pie oriented.
Unlike the NY/NJ area — where slices reign.
Pizza in Canada is compromised, flavor-wise, quality-wise.
It cannot compare with the NY metro area.
Still, one misses it.
Occasionally, one gives in.
Settles for the ersatz.
Best pizza I ever had was in Naples.
Waterside, with a view of the isle of Capri.
Where Vesuvius once blew its top.
It was incredibly fresh. Singular.
Arugula, artichokes, sausage bits, basil.
God. The crust!
Watching life ooze over the marina.
This is why one eats pizza.
To approximate that inspiration.
And NY/NJ was easily second best.
The varieties, innovations, the many mom-and-pop shops.
The faces of 3rd generation Italian immigrants.
Sometimes the accents.
Sometimes the stunning teenaged daughters asking what you’d like.

But this is not about good or okay pizza.

I mean the place in Montreal is fundamentally uninspired.
It could have been this way for 35 years.
From the looks of things.
The guy looked to be about sixty.
I could easily imagine the slices have never changed.
Three choices: vegetable, pepperoni, and plain.
Some oregano and grated parmesan shakers on a side table.
An old decanter of oil spiked with red pepper flakes.
Pepsi dispenser.
Maybe the walls were repainted ten years back.
An enlarged old soccer photo on display.
Three plain tables with chairs.
Usually empty.
Maybe he had ambitions back then.
Loved the place, and the neighborhood.
But neighborhoods deteriorate.
Customers become less familiar, more transient.
Memories dissolve into the oven, into routine.
His face was nondescript, this guy.
Maybe he legit thought the same about me.
But we took that moment, so so brief.
To acknowledge one another’s being, wordless.
And this makes all the difference.

Could see it in the faintest glint.
In his eyes.
A smile that embryoed itself in his soul.
Not strong enough to make it to his face.
A nearly undetectable softening of his voice.
He did not just give me pizza.
I did not just give him money.
Him and I, we traded something of our insides.
Without agenda, and therefore in a blessed way.
Given freely.
From that source which is prior to calculations, or planning.
Two individuals, both once infants.
Come together in this sacrament of generosity.

A wise person, I once read.
Told how it is an utter illusion that money drives labor and services.
In fact, it is goodwill.
This had an elusive haunting truth about it.
Long time, I tested it and felt it through.
That we exchange human work and creativity for money?
It is flirting with evil.
It is correct superficially.
But the matter is: is the money the only thing?
Labor, all social doing, must preserve our dignity.
Things were more apparent, perhaps.
When we were shoemaker apprentices.
Or mothers.
But nowadays the lessons are smacking our collective faces.
The bizarre work environment of the Amazon fulfillment agent.
Or even the dying of in-person shopping.
Factory jobs were bad, I mean the regimentation, the narrowness.
But at least human comradery was possible.
And God how enlightened were those black slaves!
Making song and rhythm while coerced in their working.
But now we snip out every trace.
Every scent of what is human.
Make your choices, click here.
Receive by post, half-forgotten some days later.
But even Bezos demons are insufficient to wake us up.
To show us plainly what we are missing.
In the name of dead convenience.
So providence supplies us with pandemics.
And grotesque redistributions of wealth concentration.
You want no people involvement?
We will supply it; just take a nap.
Clutter your abodes with stuff.
The way you cluttered your heart with insecurities.
And your spirit with deadening crap.

Does it really seem impossible. Still?
That things wont normalize and find equilibrium.
I am telling you.
Buying and selling is sacred.
And must be treated as such.
Perfectly plausible that collapse will be global, systemic.
If enough people lose heart with this assault on their human dignity.
Perfectly plausible that Darwinians win out.
With their myopic take on reality.
We can become animals, absolutely.
If we think this our nature.
If we conclude our humanity is illusion.
If not enough Victor Frankls confront the next hell.
If generosity is not seen as what distinguishes us.
Human kindness is the real currency.
Not crypto. Not bank accounts.
Give something more than money.
Give of yourself.
Stand in humble awe of the divinity of every human you interract with.
Amen.

Note: Victor Frankl told a story in his book “Man’s Search For Meaning”, about how he would offer half his daily bowl of soup — he was a Nazi concentration camp survivor — to whomever could eat his own soup the slowest, and savour it. He went on to become a noted psychotherapist and developed his own innovative approach to therapy.