Circa 1200 BC: The serpents represent the individualized cunning inherent in the coming epoch of the Greeks… Which the apex culture of the preceding era, the Trojans, have no means to contend with… And which only the approaching event of Golgotha carries the potential to redeem, when later men become ensnared in their ensuing entangled cleverness… 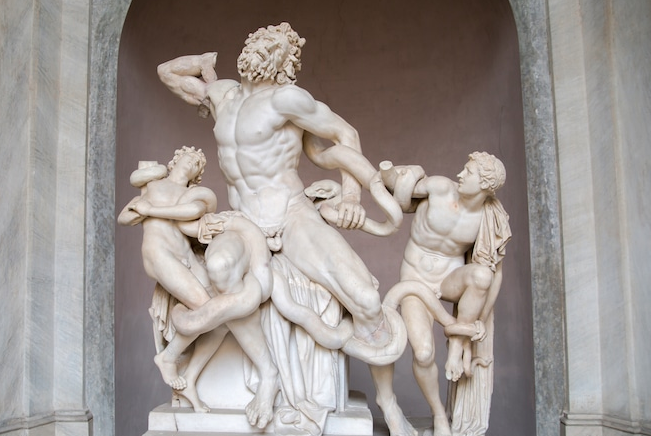 As sound constructs ears
emanations through the ether
and dawn light builds eyes
awakening gentle to earthly ways,
So must virtues sculpt our halo
like a zodiac on the ecliptic
of our unshackled psyches,
when resolutely cultivated
without aim or measure or goal line
but for love’s sake, all sacrifice endured

[ Image : the sculptural group known as ‘Laocoön and His Sons’, thought to be produced in the 3rd century BC, and presently displayed at the Vatican. link. ]

[ Notes : Omitted from the intro is yet a later difficulty which develops: that of Materialism just after the Renaissance. Thus, two confounding social obstacles for spiritual ‘salvation’, or one could say ‘normalcy’: egotism infused by personalized intellect and materialism as a worldview. The question arises, if you think on it, how did the unknown sculptor artist possibly know all this around 250 BC? Clairvoyance, i.e. visual insight into the spiritual worlds. It still persisted, in an atavistic form in leading Greek initiated individuals. Think Homer, Pythagoras, Plato, Parmenides, Aristotle, etc. Or — you could go dream up some academic fantasy explanation 🙂 ]